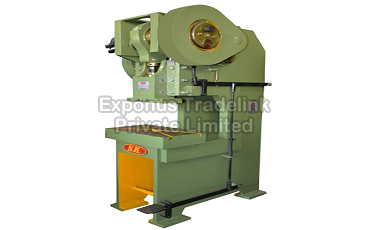 Power press is a machine that is used for pressing, blending, shaping and cutting metal sheets to attain their desired sizes. It is a multi-purpose machine too. It offers desired shapes to the metal sheets so that those can efficiently be used in the industries of automobile, electronic and electric appliances, etc. In earlier times, the manual process was used to give shapes to the metal sheets which used to demand great force and effort. Today, the power press manufacturers in Gujarat and other cities have revolutionized the method by adding accuracy and strength in the pressing thing. The tonnage and working length of the modern-aged power press machines define its basic frameworks. You can easily find some supreme power press machines from the market along with their custom and standard specifications.

The basic principle for the working of the power press machines depends on the principle of restructuring those metal sheets with the application of the desired force. The major parts of any power press machine include a crankshaft, flywheel, clutch, ram, and bed. Both of its lower and upper dies remain attached to ram. When the placement of the workpiece is done on the bed it is ready to be fed to the machine. Then the final operation is initiated. Due to the flywheel’s rotary motion, shaping and pressing works are performed only when the lower and upper die to place a force collectively.

1. Pillar type – this is used to produce safety, highly skilled work, and reliability.

2. Hydraulic power press – this machinery works on the principles of Pascal and it uses a hydraulic cylinder for creating the compression strength.

3. C type power press - it remains fictitious with modern-aged techniques and is used to offer the desired shapes and forms for the workpiece using pressure.

• It is mainly used in the heavyweight industrial applications such as engineering plants, factories, and other industrial establishments.

• In the industry of manufacturing, it acts as pressing machinery.

• It is used as a workshop machine due to its streamlined metal bending tasks.

• Its massive salient features are used for straightening, assembling and drawing tasks.

• It wields in the electrical, engineering, bicycle, agriculture and automobile industries. Hydro and compressive forces are formed by piling hydraulic cylinders together.

• The versatility and designing of the power press offer a sharp edge for the users to move it freely around the place of work.

• Different shapes are easily available through its assembling and disassembling, straightening and pressing abilities.

• It is an energy-efficient, durable and sturdy machine.

• It is user-friendly and affordable in price.

• It does not require patronizing maintenance to offer clasping, punching, and pressing.

• It remains steady for a longer-term due to its compact size.

Industrial power press suppliers offer various types of highly efficient power press machines which are a must require in the workshops.

This entry was posted on October, 30, 2019 at 11 : 29 am and is filed under Power Press. You can follow any responses to this entry through the RSS 2.0 feed. You can leave a response from your own site.